Nobody likes long goodbyes. And a fancy email signature can cause more headaches than it's worth.

Do you know someone who's overloaded their email signature? What's packed into yours? Let’s go through a quick checklist. Count how many of these elements your signature has:


None of those things is so terrible by itself. Heck we've all got some of this stuff. But when you pile them one on top of another, the result can be jarring. 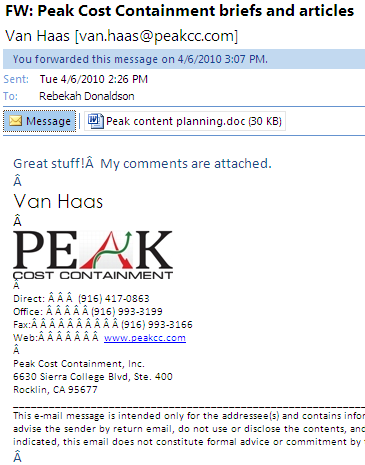 A client of ours has agreed to be an example in this article. Meet Van Haas, who leads the best cost management company in Sacramento. He likes e-mail signatures with bells and whistles - and this is how his signature looked in the early days of our collaboraton -->

The message and contact info are hiding somewhere in there. But here was my plea to Van:

Imagine you bump into the CEO of a $200M company you want as a client. You follow up with a quick email note. She looks at it on her Palm and forwards it to the VP/Operations. He gets it at his work address but he's telecommuting using his Mac. With corporate firewalls and ISPs and email platforms all processing the info, the stuff that looked cool at the sender's end gets scrambled and whacky and squinty, if not lost. And the VP/Operations parks the email for later, when he has a minute to ask the CEO who the sender was. Great opportunity evaporates.

But we're still in the land of fancy formatting. The simpler and cleaner, the better.

Even Microsoft is realizing this. In June the company announced that it would stop adding lines of promotional text at the end of Hotmail users’ messages. As reported by Todd Bishop of Techflash, Microsoft had been getting a lot of complaints about the taglines creating clutter. So even though the taglines promoting Hotmail generated about 2 million clicks per month, Microsoft realized that the clicks weren’t worth the animosity.

What's in your email signature and why?