Statistics on consumer expectations regarding business participation in social media seem to support the idea that marketers need to roll up their sleeves and get cracking.

Cone’s 2008 Business in Social Media Study Fact Sheet says that sixty percent of Americans use social media, and of those, 59 percent interact with companies on social media Web sites.

One in four interacts more than once per week.

Technology facilitated dialogue among individuals or groups, such as blogs/microblogs, forums

Role of companies within social networks

Here's another one of Cone's charts: 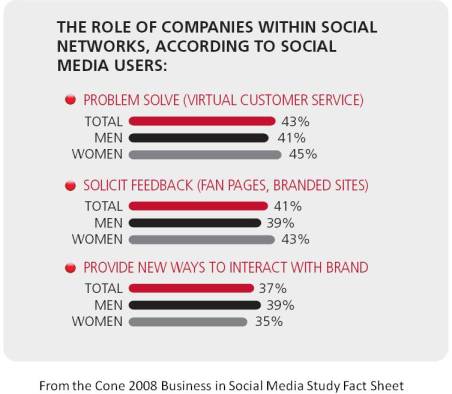 Scaling up social media participation a challenge for business

Meeting social media users’ expectations poses a challenge on the business side.

For example, as Peter Kim has pointed out in “Social media marketing’s scalability problem,” while social media technologies seem to scale ok, “the programs - especially those with a labor-intensive component - don’t.”

There’s no real shortcut when it comes to holding authentic personal dialogues. That’s the point.

If you would like to tone your business-participation-in-social-media networking muscles, feel free to meet me in these forums:

We can help you through social media coaching, blog marketing tips, and more.

Get an email when we post a new article!